Following on from things to see and do in Las Vegas, here I will give information on where are the best places to stay depending on your budget and style.

First things first, when you land at Las Vegas’ McCarran airport you are likely to need a taxi, be it an Uber, Lyft or a regular cab. Be sure to tell the driver, as well as your destination, not to take you by the tunnel. Going this way to anywhere on the Las Vegas Boulevard (a.k.a ‘the strip’) is the long way round. This unfortunately is a well known scam used by taxi drivers, so don’t get long-hauled, don’t get tunnelled!

The hotels of Las Vegas can be roughly divided into theme and non theme hotels. Traditionally Vegas has always had themed hotels although in recent years a changing market demand has led to a move away from these. Happily though many of these ‘kitsch’ hotels still remain.

On the strip at the 5* level you have The Venetian and next door The Palazzo. Evoking a level of sophistication and style taken from Europe these hotels whilst not quite replicating Italian Venice will certainly remind you of it. The gondola rides, St Mark’s Square, The Rialto bridge and Campanile will be recognisable to most, luckily there are a lot less pigeons too.

Towards the centre of the strip The Bellagio continues the Italian theme with a slightly less obvious tone. The Bellagio (and its fountains) are perhaps the most famous hotel in Las Vegas.

Another with a European theme is The Paris hotel. Noted for its half size replica of the Eiffel Tower as well as Montgolfier balloon and Arc D’Triomphe on its exterior.

At the 4* level you have the huge Caesars Palace with its Roman Coliseum, Treasure Island with its pirate ship and New York New York and its Manhattan Skyline. Each of these although at different ends of the strip are in a good location and reasonably priced.

The 3* level has the family friendly Circus Circus and the towering Stratosphere. Both of these hotels have seen development take place away from it leaving them quite isolated. However this location means you can get extremely cheap (around $30 a night midweek) rooms that are still of a decent standard.

The Excalibur, named after King Arthur’s legendary sword is the place to visit if you like a medieval style with modern conveniences and a cheap price.

Despite its 3* status The Luxor is an impressive architectural structure. The world’s largest atrium and the worlds most powerful laser beam can be found here, with the hotel rooms are built into the pyramid walls.

Many of the newer casinos have deviated from these themed properties and are aiming at a different, often higher spend clientele. The new city centre complex featuring the Aria, Cosmopolitan and Vdara were game changers in that they were 5* high end non-themed hotels. The Vdara went a stage further and was developed and remains a non-gaming, non smoking hotel. Now if you had told someone 20 years ago of this idea you would have been laughed out of Henderson County, however it has been a great success.

The Cromwell, a new and compact (boutique by Vegas standard) hotel just past Ballys, the highlight here is Drai’s rooftop day/nightclub

A notable mention should also be given to the new Linq development that has a cracking location in the middle of the strip.

As mentioned in Las Vegas Part I, the downtown area is where the value is for drinking, eating and gambling and it is no different when it comes to accommodation. You can pay  up to 50% less than you would for the same standard strip hotel. The Golden Nugget is a good option. Here you can water-slide through an aquarium of sharks and view the world’s largest golden nugget.. The rooms are also quite decent but due to its proximity to the Fremont Street experience can be noisy if not on the higher floors. 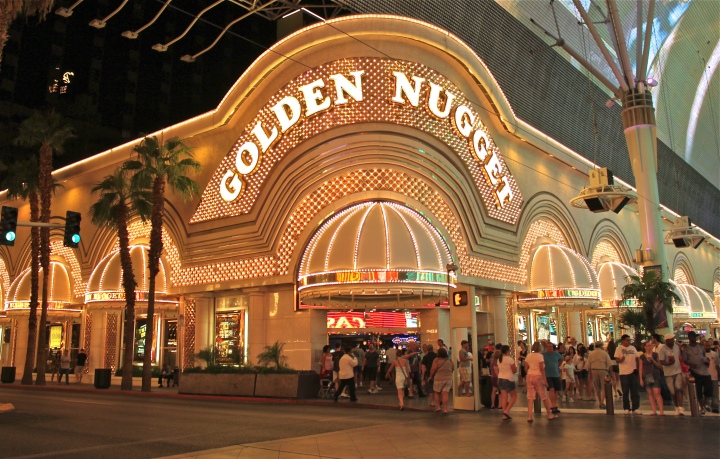 Other well priced options for the downtown area include El Cortez, Binions and The D (Delano).

Finally if you are playing in the World Series Of Poker then your best options are to stay in the Rio itself, The Palms or The Gold Coast. All have seen better days but will allow you to nip back to your room on the break.

So as you can see whatever your budget or style, there is a Vegas hotel to suit your tastes.