I had always wanted to go to South Africa and when Vanessa told me she had never been to the southern hemisphere it was decided, we were to go to the Rainbow Nation.

We were away for just over 2 weeks travelling from Cape Town to the Winelands along the Garden Route before finishing in the Eastern Cape game reserves. This blog will however concentrate on the spectacular city of Cape Town .The rest of the trip will be covered in a later blog.

South Africa is a long way down from Europe. The shortest routes go direct from London or via Amsterdam or Paris. However it tends to follow, that the further East your transit is, the cheaper the flights will be. As a result we flew with Turkish Airlines via Istanbul. With South Africa being roughly on the same timezone as Europe despite the 17 hours travelling, and lack of sleep we were tired but not jet-lagged.  This was great as we were able to get straight into the holiday.

South Africa has a chequered history, and a reputation for high crime levels. When I discuss a potential holiday to South Africa, the first question many customers ask is, ‘is it safe?’.  Crime levels are very high in the townships (the under-developed segregated areas usually on the outskirts of the city) and  some parts of the city centres can also be an issue. As usual though as long as you stay in the main tourist areas and don’t wander off, especially after dark, you should not have any issues.

We flew into Cape Town, an amazing looking city backed by Table Mountain, fronted by the beautiful white sandy beaches of Camps Bay and around. As well as having a spectacular setting it has a diverse and vibrant culture, fascinating history as well amazing (and great value) food. Whats not to like!

We stayed at the Waterfront Village Apartments in the V&A area (Victoria and Alfred, not Albert as many people assume – read about its history here). This regenerated part of the city is the best place to stay for first time visitors to Cape Town. There is good access to all the main sites and it felt very safe even after dark. Here there are a number of restaurants, bars and shops for you to enjoy. It is a very touristy area but without the typically inflated prices you often get. It is also the gateway to Robben Island.

Top things to see and do around Cape Town:

Table Mountain
From the V&A we were able to pick up a classic Hop-On Hop-Off (HOHO) bus ticket giving us safe, reliable transport  between the main tourist sights across the city. We also combined this with a ticket for a cable car to the top of Table Mountain. You can walk up this fabled mountain along various different routes to the plateau, however we decided to take the revolving cable car up and do some hiking around the top. As expected the views from here are fantastic where you can see the City Bowl, Lions Head, Robben Island and camps bay on one side and the Cape Of Good Hope on the other. There are various easy trails around the top or if you are feeling less energetic just sit and admire the views with the friendly Dassies around the visitor centre.

Camps Bay
After a good half day at the top of Table Mountain we got the HOHO bus down to the beach area of Camps Bay. Here if the weather is warm enough you can chill on white sand beach or swim in the ocean, it can be cold in the water all year round. While there have been Great White shark attacks near here there are a number of early warning systems to reduce this danger significantly. Backed beautifully by the Seven Sisters Mountains Camps Bay is a great place for a seafood lunch or chill and stay by the ocean. 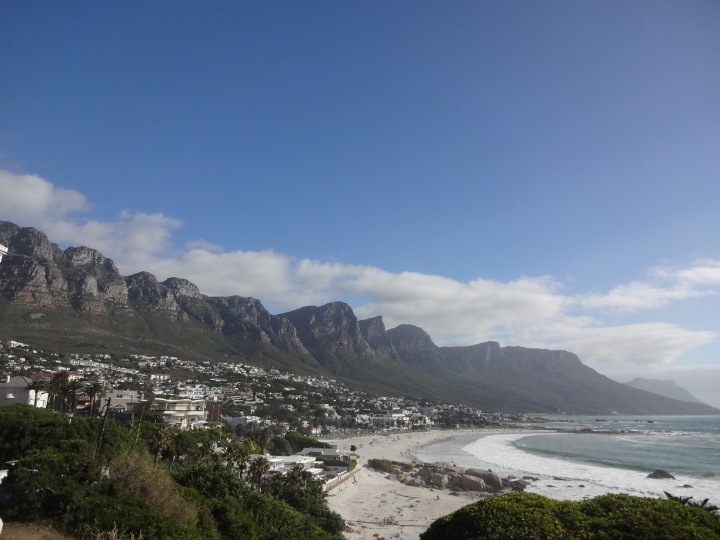 Robben Island
Most famous for being Nelson Mandela’s ‘home’ for 18 years of his 27 year incarceration. The island is a UNESCO World Heritage site and has previously served as a whaling station, a leper colony and most notably a prison. A short ferry journey  (where if you are lucky you might spot whales) takes you to the island. You will meet your tour guide when you board the buses, just off the jetty. The tour guides inside the prison are former political prisoners. They are fully conversant and knowledgeable about the Island’s multi-layered 500 year old history. The tour route includes the graveyard of people who died from leprosy, the Lime Quarry, Robert Sobukwe’s house, the Bluestone quarry, the army and navy bunkers and the Maximum Security Prison. The prison is where thousands of South Africa’s freedom fighters were incarcerated. The tour culminates with a viewing of Nelson Mandela’s cell. All in all a fascinating place to visit that will give you an insight to an important part of South African history. 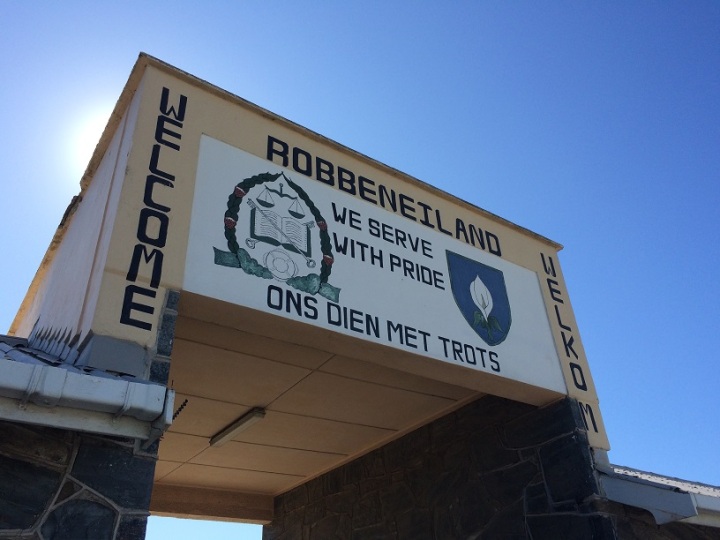 Kirstenbosch Gardens
Just a short taxi drive away, more than just a garden, Kirstenbosch is part of a nature reserve. The 36 hectare area contains protected mountainside supporting natural forest and fynbos along with a variety of animals and birds. The Kirstenbosch Estate borders the Table Mountain National Park, and the Garden merges seamlessly with the natural flora and forest of the mountain. The picture below will better show what to expect!

Cape Of Good Hope
We visited this famous spot after leaving Cape Town en route to the Winelands. Be warned it is very touristy and getting a photo with the famous sign takes some patience! There is a lighthouse here a short walk from the car park that marks the end of the peninsula. This is the most South-Westerly point of the continent whereas the less visited Cape Agulhas 4 hours east of Cape Town is the actual southerly most point. You only really need to spend a couple of hours here but it works well with a visit to Boulders Beach on a day trip from Cape Town.

Boulders Beach
You do not need to go as far as Antarctica to see Vanessa’s favourite little animal, the penguins. Here at Boulders Beach, a 45 minute drive from Cape Town near Simons Town, you can see African Penguins that inhabit this area year round. You can go on an organised tour but if you have a car it is much cheaper and easier do drive yourself there and pay the R35 (about £2 /$3) entrance fee and stroll along the boardwalk at your own pace. You actually get surprisingly close to these intriguing animals as they waddle around.

Bo Kaap
This small district in the City Bowl area is famous for having brightly painted houses.  The exact reason is unknown but many point to it being a expression of the South Africa’s Rainbow Nation demonym whilst others suggest the predominantly Muslim residents painted them in preparation for Eid. It is nice area to walk around and take some photos but best to stay on the main streets as we were warned by an elderly resident not to venture much further than that.

District Six
This museum, opened in 1994, in an inner-city residential area of Cape Town celebrates the the once lively multi-racial area that was destroyed during apartheid in the 1960s and 1970s. It contains a vast amount of information and memories from the forced removals of over 50000 South Africans during the country’s most depressing era. These are not experiences you would describe necessarily as enjoyable  but they are important to understand a country’s culture and how it formed to be what it is today.

Food and Drink
After all this sightseeing you are going to need some sustenance. South Africa cuisine is very meat-oriented with fish is very prevalent in Cape Town. They of course have some great value wines also. We treated ourselves to slap up meal at the famous Nobu (housed in the 5* One & Only hotel in the V&A) which is one of the cheapest Nobu’s in the world. On the waterfront itself you can get a 3 course meal with wine for around about £30 total for 2 people. Wines from the cape go for about £2-£3 per bottle. Biltong is perhaps its most famous food export while Bobotie is now the national dish. 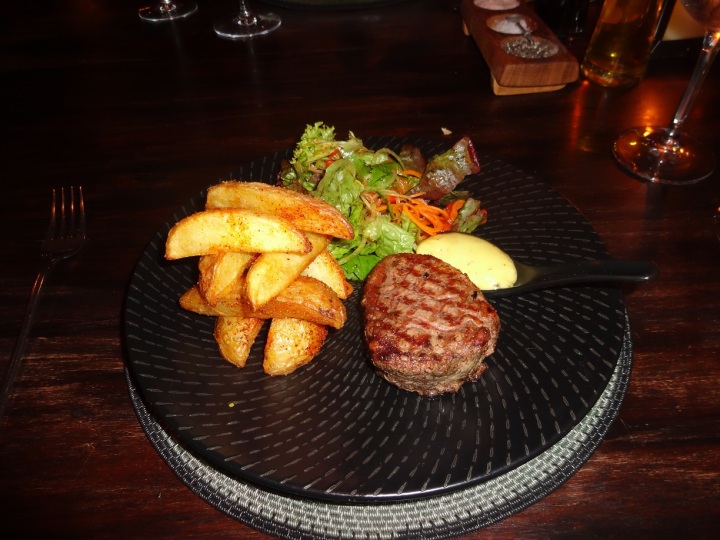